Abandoned by her family, Kya raises herself all alone in the marshes outside of her small town. When her former boyfriend is found dead, Kya is instantly branded by the local townspeople and law enforcement as the prime suspect for his murder.
Full Certification 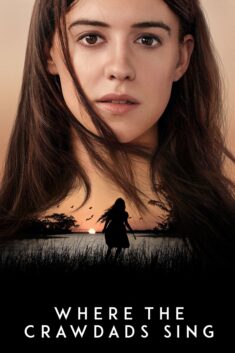 In the scene where the girl sits in jail and a cat walks into the cell, the path to set was free and clear of all obstacles. There were two professional trainers on set. Cats were well trained. Filming took place inside a studio so temperatures were pleasant with the air conditioning running. Doors to the studio were shut and secure to prevent an escaped animal. Multiple cats were used that were more suited for the action.

In the scene where we see the family at a lake house and there are chickens, ducks, cats in the front yard, the trainers transported the chickens, skunks, ducks, cats and buzzard from their animal boarding facility to set in kennels secured in their vans.

(The skunks and cats each had individual kennels with free choice water, bedding and litter. The ducks and chicken were housed 3 to 4 birds per large portable kennel. The Augur Buzzard was housed in a hawk transport crate.)

When called for filming of this scene, trainers carried the portable kennels containing the chickens from their vehicles to a quiet location adjacent to set. (Note: The Chickens being filmed were buzzer trained.)

Before filming, the actresses designated to handle the hens were given instructions by the trainers on how to hold and catch the hens. On action, the actresses holding the hens released the hens and began playfully herding them toward the chicken coop. The hens trotted, stopped, clucked, and scratched at the ground. Trainer Dave placed the hens in the coop and rewarded them with food treats. Between takes, the hens were taken back to their kennels in the quiet area for a water and rest break.

In the scene where the girl feeds the chickens as her family leaves in the background, the crew wide safety meeting was held prior to filming. Animal protocols were discussed by the head trainer. The chickens being filmed were buzzer and tether trained.
The set was located on a secure site on a state park and not open to the public. The crew was kept quiet and still when the animals were working. The chicken coop was completely fenced. The animals were well prepped for the required action.

In the establishing scenes where we see animals in their natural habitat, the film used a small crew to film animals and never interrupted their natural behaviors.

In the scene where the girl sits on her porch and sees a hawk on a tree outside her window, before it flies off, a tree branch on what looked like a small dead tree was used for a perch. It was part of the set that was built. The hawk started his A to B from one of the branches. The trainer set the hawk on a tree branch. The branch was to the side of the porch and about 18 inches from the screen. The camera panned away to a wider shot overlooking the actress, and the hawk on the side of the porch. The trainer used a bait stick with a piece of meat on it to pay the hawk right away to gain the hawk’s eye line.

In the scene where the girl stands on the beach and feeds the seagull, the trainers transported the four Australian Silver Gulls from the animal boarding facility to set in the back of trainer’s air-conditioned van. The gulls had free choice water in their kennels and fresh bedding. When called for filming of this scene, trainers attached soft braided tether cuffs with a line running between the cuffs to the legs of the two primary gulls. The trainers then attached the 30 lb. safety tether to the line running between the cuffs.
On action, trainer placed the primary gull on the actress’s outstretched palm. The gull calmly stood on the actress’s palm. Trainer then cued the gull to take flight using hand cues. The gull flew up and off the actress’s palm and to his companion gull on the landing platform. Trainer Larry maintained control of the gull’s safety tether at all times.
On cut, the trainers gently placed the gulls back in their individual kennels for a rest and water break. The gulls were wrapped shortly after filming of this scene was completed.

Trainers removed the cuffs and safety tethers from the gulls and ensured they were safe and secure in their kennels. Trainers then hand carried the kennels back to trainer’s van.