King Charles VI declares that Knight Jean de Carrouges settle his dispute with his squire by challenging him to a duel.
Full Certification 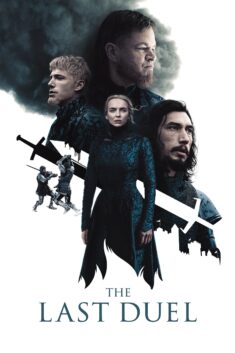 Throughout the film, goats, chickens, mules and other background animals were seen milling about. This mild action was achieved using one or more of the following methods: the animals were allowed to graze at liberty; they were attached to lead ropes (held by actors or tied to posts); and/or they had their legs hobbled with soft cotton rope. Costumed trainers were in the scene during filming and/or trainers stood just off camera.

In the opening scenes where the two men walk out of their individual tents, mount their horses and ride into the arena, production hired horse riders experienced in working in films. The horses were adequately trained, conditioned and prepped for use on a film set. All equipment and tack were safe and serviceable. Horses were never left unattended, adequate number of groomers looked after the horses between scenes. Horses were calm, well-behaved and controllable all times. Production provided deep sand footing in the arena for the horses to work safely on. Horses were shod with proper shoes. The smoke was in the background, it was far from the animals. Also SFX crew threw artificial snow on the ground, and watered the terrain when the wind rose to keep the materials down. Fireplaces were monitored by firemen all time, and it was from a safe distance of the animals.

When both rides enter the arena and prepare for the duel, the two trainers rode horses into the middle of the arena and faced each other. On action the two horses cantered in the middle of the arena and stopped in front of the grand stand. On action riders charged toward each other. Horses passed 2 meters from each other. When we see the jousts connect, the hero horses wore material made of foam. The lances were made of hollowed easily broken plastic and filled with pieces of wood. The lances head was made of foam. Horses also wore a sword attached to their saddle on the left side made by wood.

In the scene where men on horseback overlook a bunch of other soldiers and ride towards them by crossing a creek, before they engage in hand to hand battle, the river was twenty five meters wide. Production filled the riverbed and the entrance and exit of the river with sand, that provided a solid even bed. Horses worked at the location previously, and practiced the river crossing. Horses were comfortable and confident crossing the water. In the battle where we see a soldier kill a horse and the soldier fall off of it, the dummy horse was placed at the end of the rail. When the soldier speared the fake horse, production pulled back the dummy horse to the further end of the rail. On action riders started to fight in the background, while dummy horse moved to the end of the rail and both dummy horse and stuntman fell to the ground.

In the scene where the line of soldiers returned to castle after the battle and we see two dogs as part of the congregation, the horses had dirt and sand applied by their grooms and riders to show they returned from a battle. The horses were walked to their start mark. The infantry were placed behind the horses. On action, the twenty eight horses and two mules cantered along the sand covered street to the entrance to the castle where they slow down to a slow walk with the crowds cheering the returning army.

In the scene where the two men ride over open field and we see a flock of geese walk past them, on action the horses were far away from the geese. Trainers brought the geese to the set, let them out of their cages and retrieved them after filming.

In the scenes where the horses and carriage pulls up to castle on road, The horses were walked into the courtyard set by their grooms and the drivers were hitched to the waiting carriages. On action, three horses stood on their mark with the six heavy horses hitched to three carriages. The actresses walk from the house to the carriages then enter one carriage then some dialogue with actor who mounted his horse and rode out of the courtyard.

In the scene where the actor rides out of town on a bridge, and on the other end of the bridge, we see thirty sheep and two collies, all background animals were calm and safe, with adequate number of handlers. The sheep were familiar with the herding dogs.

In the scene where we see a group of men hunting a deer in a field with a mass of hunting dogs proceeding them, production prepped this scene for a day before filming. The animal action was pretty complex with lots of elements, and needed a serious cooperation from the animal handlers and horse riders. Production used forty professional hunting dogs that ran up to a fake stag carcass, the animals were never unattended, and handlers were watching them all time. Between takes the dogs were held in an area close to the set and given food and water.

In the scene where the actor walks outside, sees two horses mounting each other and he hits one of them with a shovel, prior to filming the horses were kept offset in an adjoining field where they relaxed and ate hay placed on the ground. The horses walked outside the stables were led by handlers in wardrobe. The production used to horses they knew would mate. This set up is of the stallion and mare doing the mating action. This was real. When the actor ran to one of the horses and beat his rump, he used a rubber shove. On cut the horse team rush into grab the stallion and pat his neck and generally take his attention away by distraction. The horse was uninjured by the rubber shovel.

In the scene where we see the actress on the plain with the woman ploughing the field with a pair of oxen, the plough for the oxen is already on its mark. On action, the two oxen pull the furrow plough to a stop. The goats are behind the Oxen in the grass held on mark by the handler.

The “duel” sequence was filmed over five days and was planned for months. When the two riders first enter the arena, the horses came from the two ends of the arena. The horses were led by groomers in costume. Both horses stopped in front of the tower, facing the tower held by groomers. They started filming and took shots of each of the actors on horseback with the crowd cheering.

When the two horses ride towards each other with the jousts, the horses were adequately trained, conditioned and prepped for use on a film set. All equipment and tack were safe and serviceable. Production did a rehearsal with horses. Each actor rode double with a stunt rider who was holding a lance with a camera attached to it.
Hero horses with riding doubles started at the two ends of the arena. The rehearsals were conducted at a slow speed, and gradually built to the required speed. The horses were comfortable with the movement and the noise of the cameras. The terrain was even, the insert car followed the same path every time. The insert vehicle driver maintained the speed and the distance between the camera and the horses. When the lance and spear connected, they were made of light wood that broke on impact. When they galloped against each other, and one rider pushed the other against the wall, the horses started cantering toward each other, and one leaned back and turned the horse to the left toward the wall. Then stopped at the wall. They rehearsed this action and the horse knew when to stop.

When they joust again and one actor pierces the other’s horse who falls on him dead, production used a fake horse for this scene. First they filmed the horses riding past each other. Then they filmed a lance penetrating a fake horse on a rail. A real horse never fell on the actor or was hit by the lance.

When they ride out of the arena with the crowd cheering for them, production cleared a path for the actor to ride between all the people.