Monitored: Outstanding A gritty detective enlists the help of an uber driver to track down a drug kingpin. 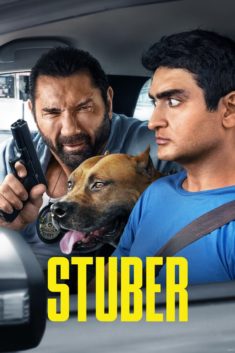 In the scene where the actors walk into an apartment filled with gang members and we see a pit bull sitting in a chair, the dog was prepped for the action required. Two professional dog trainers were present on set. The dog was leashed to keep him on mark and out of the action. The dog met the actor and stunt man prior to filming. When the actor runs out of the house with the dog on leash, the footing was safe for the dog. The glass scattered in the road was made of silicone. The dog met both actors prior to filming. No gunfire or squibs used while dog was present. The actors rehearsed putting the dog into the car prior to shooting the scene. The dog jumped into the car without an issue. The car was air-conditioned at all times.

In the scene when the dog vomits small baggies of heroin, the dog laid on mark in front of the couch. When filming began, the trainer placed the three baggies with honey in the dog’s mouth. The dog spit them immediately out onto the floor. The dog was asked to crawl forward, bark, lay his head down, roll over, and stay. The dog also lied sternal with his head down as the trainer rocked him slightly forward a few times as if he was heaving before vomiting. The dog was positioned at the edge of the platform and asked to bark looking down off the platform. This footage will be tied together so that the bark looks like the dog opening his mouth to vomit. The dog never actually vomited.

In the scene where we see the inside of a vet’s office with dogs, rabbits, guinea pigs and cats in cages in the background, all the animals were placed in cages by the trainers. Water bowls and bottles were filled for small animals and hay was added for guinea pigs and rabbits. Trainers then moved out of frame. On action, actors have dialogue and then they film two different versions. An actress shoots the actor in one version. There was no gunfire with the animals in the room.

In the scene where there’s a gunfight in the animal hospital, and we see the shot of a rabbit, unfazed by all the action, there were no squibs going off with the animals in the room. On action, as the actor fell out of camera view, effects sprung the trigger rigged to the door that pulled the monofilament causing the cage door to spring open showing a large rabbit sitting inside. Gunfire and explosions were placed in the scene in post production. When the gunfire ceases and we see a few birds fly by, the doves were carried on to the set by trainers in small wire cages. The trainers each picked up a dove out of their cages. Then trainers laid down behind a cabinet in the room on top of mats cradling the birds. On action, the trainers lifted their birds up and released them in the air. The birds flew up toward the camera and spread out, seeing the nets to the left, doves flew toward the right and landed. All doves were easily recovered by trainers with nets before any crew member moved about the room.