Men In Black is a film based on a comic book series about a secret organization that polices and monitors alien activity on earth. Most of the aliens are law abiding citizens who look and act like humans. Actual humans do not even know the aliens exist. In this segment, the Men in Black are faced with an explosive situation for earth. If they don't retrieve a device stolen by the "Bug" aliens, from the Baltians and Arquillians, two feuding galaxies, the earth will be destroyed.
Modified Certification 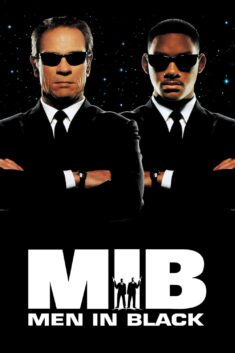 There is a scene where Mr. Kay, one of the Men in Black, is interrogating an alien, who happens to be in the form of a talking dog. Mr. Kay picks up the dog and shakes him in order to retrieve the desired information he needs. When the dog doesn’t respond with the correct answers , Mr. Kay proceeds to shake him until he does. After getting the information, Mr. Kay places the dog on the sidewalk and the dog trotts down the street. The dog notices a cat lying on a window sill and stops to bark at the feline. This scene was shot in several cuts. In another scene, Mr. Rosenberg, an alien disguised as a man, exits a store. He places a satchel, containing his cat, on a jewelry box as he locks the door to his store. The cat sticks his head out of the satchel and looks around just before Mr.Rosenberg picks up the satchel and walks down the street. He walks into a restaurant to meet another alien. The satchel containing the cat is sat on a vacant chair while the two men converse. It is at this time that the Bug alien walks in and the cat is heard hissing as he approaches. The cat retreats to a table and continues hissing as the Bug alien leaves the restaurant. This scene was shot in cuts. The trainer placed the cat on his mark and cued him with verbal commands to hiss and to go from one point to another. When the cat is seen in the satchel, the trainer merely placed the cat inside and the actor carried the him from point A to point B. In a scene at the morgue, the cat rides along on the gurney as his owner is being wheeled in. There are several other shots of the cat walks around in the morgue, sits on the medical examiners desk, rubs up against Mr. Jay’s legs etc. For all of these shots the trainer placed the cat on his mark and cued him with verbal commands and a buzzer with food as a reward. Later, the cat is hisses as the medical examiner strokes his fur. The cat, can sense the Bug aliens presence before the alien walks through the door and so the cat darts off of the desk to find a hiding place. When the Bug alien hides under the gurney from Mr. Jay, the cat sits on top. Bug alien grabs the cat from under the gurney, holding onto the animal before knocking over the gurney. The Bug alien momentarily struggles with the cat as he yanks its collar off. After that the cat runs across the morgue floor retreating from the scene. This scene was shot in cuts. A real and a fake cat were used. The cat was wearing a break-away collar. The trainer placed the cat on his mark and cued him with verbal commands. When the cat is seen being taken from the top of the gurney by the Bug alien, the trainer placed the cat on the gurney, and the actor, prepped prior to the scene, gently grabbed the cat and held him in his lap. The real cat was replaced by a fake one for the shot of the Bug alien knocking over the gurney and then the real cat was again placed in the actor’s arms. Food was placed on the actor’s shirt so it would look as if the cat and alien were struggling as the alien tried to remove the collar. When the Bug alien is trying to escape, cockroaches appear on Mr. Jay’s coat sleeve. He looks down and sees more around the bottom of the dumpster and proceeds to kick in the corner, releasing a number of large cockroaches. To attract the Bug alien’s attention, Mr. Jay supposedly begins stomping on the scurrying cockroaches which in turn infuriates the alien. This scene was shot in cuts. When Mr. Jay kicks in the dumpster revealing the roaches, two trainers were inside releasing thirty roaches through a tube. As a safety precaution, 12″ of Plexiglas surrounded the side and back of the dumpster and a 5″ sheet was used for a barrier in front of the container. Plexiglas was connected to the floor and a coating of vaseline covered the top to keep the roaches contained. Prop roaches were scattered around the thirty live ones to simulate a large number. The roaches seen on Mr. Jay’s coat sleeve were placed there by the trainer and attached with monofilament line. To simulate the guts of the squashed roaches, the actor stepped on Mustard packets. After all the takes were done the dumpster and bushes were taken apart to retrieve all the bugs. Other animal action consists of a cow, chickens, and a goat seen in the background at the farm where the Bug alien lands. There are also some roaches seen scurrying around on a barn floor, crawling out of the sleeve of Bug aliens shirt at the restaurant and the morgue. When a bug is seen splatting on the windshield of a vehicle, it was not a real insect but one generated through special effects techniques. American Humane was present on set to monitor some scenes in the film. For those scenes which we were unable to monitor, we conferred with the trainers and found no evidence of any AHA Guidelines violated.