From the vivid imagination of Tim Burton comes a wonderful story about the art of storytelling and the conflicted relationship between a father and son. Adapted from Daniel Wallace's debut novel of the same name, Big Fish tells the tale of William Bloom (Billy Crudup), a news-agency reporter who returns to his childhood home in Alabama with the hopes of reconciling with his terminally ill father Edward (Albert Finney) before it's too late. Ed's colorful, far-fetched stories about his youth clash with Will's eminently more empirical views on life, and the film plays these contrasts against each other until the boundaries between the two become blurred and reveal the greater lesson: sometimes there are more important things in life than the truth.
Modified Certification 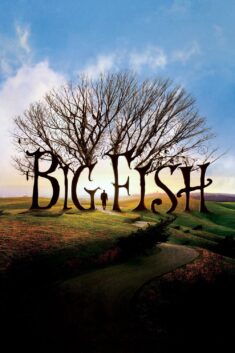 An extraordinary scene under the Big Top highlights the talents of many animals in this film, including lions, elephants, dogs, cats and even a wayward pig. Some moderate to intense animal action occurs with a wolf, a raven and some vultures.

(Not So) Big Bad Wolf

Ed opens the door to Amos Callaway’s (Danny De Vito) trailer and a black wolf jumps out and knocks him to the ground, where they wrestle for a spell. Ed finds a stick nearby and throws it to distract the wolf, who races to fetch it. This sequence was done in separate shots, and a real wolf appeared in the beginning and end of the scene. To make the wolf snarl and growl, the trainer reached for a bone placed near the animal. During this snarling segment the wolf wore a lightweight cable called a waist tie that the trainer held from off camera, and this shot was inserted into the film during post production. When the trainer threw the stick, the wolf fetched it and returned to its mark. The actor then took his mark and threw the stick to the wolf as the trainer stood nearby. The wolf continues fetching the stick, and at one point he jumps on top of some cars. Specially made wooden boxes were constructed by the crew and painted green so that they could be edited out later. The wolf jumped on the boxes following the direction of an off-screen trainer. This was filmed in front of a green screen and the cars were added into the film in post production.

Crew members modified Callaway’s trailer by cutting away part of the rear and building a special ramp onto the back end where they placed a release cage. One trainer doubling as the actor stood by the trailer door holding up some food while the other handler released the wolf from the cage and encouraged the animal to jump up at him. For the wrestling sequence, the actor actually tussles with an animatronic wolf. Since wolves are pack animals, it’s important to note that trainers had another wolf “friend” on set at all times so that the actor wolf felt more secure.

Numerous circus animals perform during one fantastic sequence, and the film freeze frames as several of them act together in the ring. Trainers doubled as the actors to more easily manage the animals. Trainers posed with the animals in front of the camera to make it appear as though they were in the middle of their acts when time froze. The elephant, pig, cat and dog that seemed to perform simultaneously never really interacted with each other and trainers were with them at all times.

For one act, handlers brought a real lion into the circus ring using a special transportation cage on wheels. When the cage door opened, the lion entered the secured ring and took its mark alongside two trainers, who stood next to the animal cracking whips on the floor and in the air to get the lion to snarl. Under the trainers’ watchful eyes, the actor stood in front of the big cat to make it appear as though he has just taken his head out of the lion’s mouth. In reality, the props department had constructed a fake lion head in order to pull off that shot.

A domestic housecat ascends nearly 30 feet in the air on a platform and, on verbal cue, leaps down onto a large pillow held by a costumed trainer below. The production constructed a special platform attached to cables and a pulley that was controlled by a crew member from off camera. A trainer placed the cat onto the platform and then slowly lifted it into the air. The floor below had a padded cover and this cat had learned to jump as far as 70 feet. The trainer caught the cat and moved the pillow with the momentum of the animal. This cat has been performing the stunt for seven years now.

One of the circus’s human stars, Soggy Bottoms, performs on stage with a small dog that appears to be lying on her stomach, even when the entertainer stands and moves around. The actor’s costume had a little box built into it where the dog fit comfortably, and its trainer stood nearby to cue the dog to bark.

Three elephants stand in a pen while Ed works behind them shoveling up their waste. Trainers put the elephants into the pen after clearing the ground of any debris. Similar to the waist tie worn by the wolf, the elephants had temporary lightweight chains attached to one foot which provided safety for the actor and still allowed ample mobility for the animals. Trainers surrounded the pen to keep the elephants’ attention while the actor stood inside the pen shoveling mud that doubled for poop. Trainers placed the actor on his mark, making sure he did not come too close to the large animals. Later, a man leads an elephant into the circus ring. The animal’s trainer doubled as the actor for this scene. During the course of production, the elephants were exercised regularly, moved about unencumbered in their stabling areas, and housed in heated trailers overnight.

Ed struggles to put a tutu on a pig then chases the hog through some booths set up nearby. The pig wore a harness held by the trainer as he walked the animal onto the set. The trainer handed the leash to Ed, and upon the trainer’s verbal cue, the actor dropped the leash and the pig ran away. To achieve this action, the trainer hid food throughout the booths; after several weeks of rehearsal, the pig knew this. The pig ran to its trainer, eating as he went. All of the people in the booths were stunt people and very aware of the pig’s action throughout this sequence.

Mini horses pull a crate onto the stage and a giant emerges from it. Trainers hooked up the horses to the lightweight crate made by the production crew. When the animals pulled it onto the stage, the crate was empty.

As the giant takes a bath in a huge tub outside the circus tent, a tower of giraffes stands behind him. A trainer placed the giraffes in the fenced-in corral and put some food down for them to eat. The grounds and fencing were checked for safety before filming began.

Ed escapes a burning house carrying a St. Bernard that he hands over to a waiting firefighter. The props master and his crew set up three fire bars inside the house so that the technicians could control the flames once ignited. The crew also set up a smoke tube in the doorway so it appeared smoky as the actor exited with the dog in his arms. To complete this scene safely, two trainers stood with the dog in the doorway waiting for the director’s cue. When the cameras began to roll a trainer handed the St. Bernard to the actor, who had learned how to handle the dog prior to filming. And like many of his human counterparts, the canine star received a massage from his trainer before the scene began to help him relax and appear limp in the actor’s arms.

Ed comes upon a cave with vultures perching on some bones outside. Animal handlers used three South American vultures for this segment, and the production purchased the bones from a meat packing plant and had them boiled and cleaned prior to use. A trainer smeared some food on the bones to make the birds want to stay on them, and then tied a lightweight monofilament line to the birds’ legs so they wouldn’t take flight during filming.

As Ed walks in the woods, a large raven swoops down and steals his hat. The bird lands on a nearby branch and taunts Ed while clenching the hat in its beak. To get his hat back, Ed hurls a stone at the bird but misses, hitting a beehive instead and causing a swarm of bees to go after him. To achieve that precise bit of thievery, the trainer worked long and hard with the raven, teaching the bird to wait patiently on the tree branch until he came up to retrieve it after each take. When Ed tossed the stone, the bird was not actually on the branch.

As young Ed (Ewan McGregor) approaches the Witch’s house, a cat streaks by and frightens him. Another cat runs by as he gets to the door of the house. Later, Ed enters the house and sees cats all over the place: on the furniture, on the floor and on the porch. Trainers placed the cats on their marks and scattered food around for them. The trainers stood off camera watching the cats, allowing them to act naturally for a bit before they retrieved them..

Movie magic created the fireflies, bees, leeches, snake and the big fish seen in the film.