Four criminals are slain leaving their widows with nothing but a dangerous debt. Now they must find a way to survive.
Full Certification 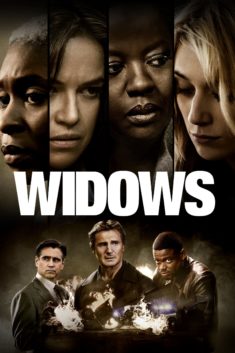 In the scene where the dog runs to the front door, barking, the actor walks inside, picks up the dog, and walks through the house holding the dog over his shoulder. At one point the actor stops, talks the actress holding the dog up, and we hear the dog yelp as if he’s in pain. He hands the woman the dog and walks out. Prior to shooting the scene the trainers brought the dog to set. They used a fake dog during rehearsal. Prior to shooting the trainer placed the dog into the actors’ arms. On action, the actor carried the dog on his left shoulder into the living room from the hallway. The actors sit down, a little dialogue. Then the actor stands up with the dog held in both of his hands, lifts the dog with one hand. This is how the achieved the perception of the dog being distressed. Prior to shooting, the trainer placed a special harness on the dog. Then the other trainer put a nylon velcro wrist strap on the actor’s right arm under his shirt, then he placed the dog on the actor’s lap and attached the carabiner from the wrist strap to the clip on the dog’s harness. On action, the actor stands, with the dog connected to his right arm, his left hand on the dog’s collar and his right hand around the dogs neck, appearing to look like he is choking the dog in a threatening manner. In actuality the dog was in no distress, being held up by the harness, never feeling any pressure. The sounds of the dog yelping were added in post-production.

In the scene where the actress walks her dog into a garage-like room, she placed the dog on the ground, and the dog ran to sniff a chair, prior to shooting the scene the trainer baited the dog treats by placing the treat near the legs of the table. On action, the actress places the dog on the ground, the dog looked around, ran to the chair, and sniffed the bottom of the chair.

In the scene where the woman walks into the person’s house, holding a dog, places the dog on the ground and the dog runs to a closed door barking, production provided the dog with water and food between takes. One trainer was behind the camera holding the dog, the other trainer hid behind the closed door. The trainer reinforced the dog with small pieces of hot dog to get the dog to bark. On action, the actress placed the dog on the ground, and the dog ran to the closed door and barked.