After his retirement is interrupted by Gorr the God Butcher, a galactic killer who seeks the extinction of the gods, Thor enlists the help of King Valkyrie, Korg, and ex-girlfriend Jane Foster, who now inexplicably wields Mjolnir as the Mighty Thor. Together they embark upon a harrowing cosmic adventure to uncover the mystery of the God Butcher’s vengeance and stop him before it’s too late.
Full Certification 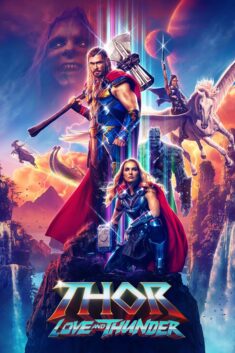 In a scene where men fight monsters in a small village, we see a few of the soldiers on horseback. Prior to shooting, four horses arrived at the base where they were unloaded, brushed, fed hay and given water buckets. Rubber mats were placed over the cobbled stones. The horse rehearsed the action both at home over the weeks before and on set.
On action, a stunt double rode the horse fighting monsters with a plastic spear. Most of the visuals were done in post.

In the scene where Thor talks to the actress on horseback who jumps off horse, prior to shooting the actress rehearsed jumping off the horse that’s held by the wrangler.