Paranormal investigators Ed and Lorraine Warren encounter what would become one of the most sensational cases from their files. The fight for the soul of a young boy takes them beyond anything they'd ever seen before, to mark the first time in U.S. history that a murder suspect would claim demonic possession as a defense.
Full Certification 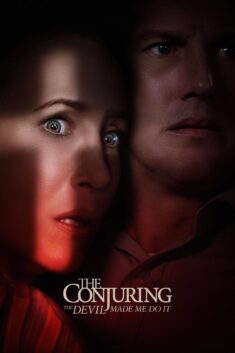 The Conjuring: The Devil Made Me Do It
Release Date: June 7, 2021
Certification: Full Certification

In the scene where the actors walk into the back of an apartment and go into a room where there are a bunch of dogs in cages, barking, seven trainers were on set, handling dogs. The room was air conditioned from a unit pumping outside through window. The
cages were secured to shelf so they would not move. Water was provided and refilled throughout filming. Prior to filming the scene, one of the trainers walked in front of the actors giving “speak” commands to dogs to elicit barking. All the actors were instructed on how to work with dogs prior to filming the scene. Right after filming the scene, the dogs were released and brought to air conditioned vans where they were given treats.

In the scene where the actor crawls under the house and points a flashlight on a bag surrounded by rats, the rats were prepped for the action required. A professional trainer was present during filming and was the only person to handle the rats. Barriers were put in place to prevent rats from escaping. The footing was safe for the rats. Prior to filming the trainer placed the rats on their mark, placed some food a few feet away from them. When they called action, the trainer pressed a buzzer which made a sound and the rats ran to the food.

In the scene where the rat runs out of a cereal box on the ground, the trainers prepped the rats to run from point A to point B. The rat was ran along blue pieces of wood. This was done so camera could digitally remove the blue wood so it appeared rat was running through the room. The panels acted as barriers to keep the rats from running in a circle or wandering off. The trainers were close by. On action, one trainer pressed a buzzer, and the other trainer had a plate of food for the rat to run to. On action, the trainer pressed the buzzer, the rat ran out of the cereal box, on the panel, and reached the food.

In the scene where the couple drives up to the farm where we see chickens grazing on a front yard, the chickens were brought to set by their trainers in SUV’s that had air conditioning. They placed feed on the front yard. Prior to filming they unloaded the chickens on the ground where they ate the feed. The trainers also instructed the actors where to park and where to walk.