In his second year of fighting crime, Batman uncovers corruption in Gotham City that connects to his own family while facing a serial killer known as the Riddler.
Full Certification 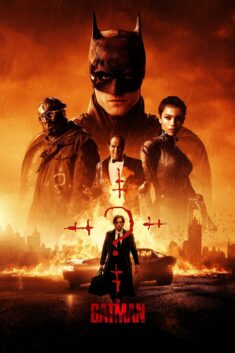 Throughout the film, one of the characters has pet cats, who is seen performing such mild action as sitting/standing/lying, being held or petted, and walking/running on or off leash. For all of these scenes, trainers used hand signals and verbal commands to cue the mild action, which the trained cats were accustomed to performing.

In the scene where the actors walk into apartment and see a few cats walking around a dirty apartment and dead body, the cats were carried to set in plastic transport boxes. The trainers placed the cats on their marks. A handler kept her in a “stay”, remaining in her eyeline and stepping in periodically to give her a food reward. The tabby cat was lifted out if her box and placed in position on a cupboard to the right of frame. A handler stayed in her eyeline to maintain her stay. The tabby cat (Dave) was placed on the counter in the middle if the shot. The trainer held her eyeline using a bait stick with a food reward. They filmed the scene with the cats on their marks. After wrap, they placed the cats back in their transport boxes.

In the scene where we see a man with a deadly contraption on his head with a rat inside, production used a Perspex and wire cage that fit over an actor’s head and rested on the frame on his shoulders. There are three levels in the cage which the rats have access to as they move around in front of the actors face. The exterior surfaces of the Perspex had multiple air vents. American Humane approved the use of the cage prior to filming. Prior to filming, each rat was placed into the cage and the sections closed once the rats were in. After they filmed several scenes of the rats in the contraption, the rats were removed and placed back into their transport cages.

In the scene where we see several cats gathered around Batman’s feet, the cats were carried to set in carry boxes. Each cat was individually prepped by being given a ‘rub’ command around the double’s feet. On command, the cats rubbed against the actor’s feet and regularly giving the cat food rewards.

In the scene where we see people gathered around the front of the city hall and there are policemen on horses, and a few K9 Units, the dogs were led to set by their handlers
Prior to shooting, the handlers were given a position to stand in the shot and the dogs were cued to sniff as if searching the area leading up to a grand hall. The handlers carried kibble in their pockets and threw pieces of kibble onto the floor so the dogs searched for it to eat. The dogs were taken back to their trailer once the shot was done.
The horses were tacked up at their horsebox by the grooms. The riders in costume mounted at the horsebox and rode the horses to set. The ADs gave the horses a position to start their action.

In the scene when the actor looks inside the cage and sees rats, the rats were transported to the studio contained in cages. The trainer transferred the rats to plastic & wire carry boxes and carried these to the set. The trainer transferred the rats to the set cages and made sure each cage door was wired closed. Each water bottle on the cages was filled. The trainer remained on the set while the rats were in the set cages.
The trainer periodically sprinkled a little food (grain) into the corner of the cage to keep the rats close to camera. The bat was created through VFX.

In the scene where the girl places the cat in the pannier in the back of the motorcycle, the cat was carried to set in a box containing a litter tray & water bowl. Prior to filming the scene the trainer showed the actress how to lower the cat into the pannier. The cat had previously been prepped the sit into the pannier and turn itself around.