Monitored: Outstanding After a man is attacked in the street, he learns to defend himself from a strange albeit charismatic sensei. 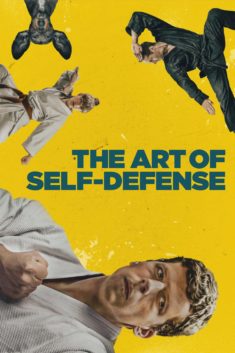 The Art of Self Defense
Release Date: July 12, 2019
Certification:

In the scene where the actor comes home and sits next to his dog on the couch, prior to shooting the trainer placed the dog at the end of the couch and told her to “wait”. She also gave her the hand signal for “stay”. When filming began, the actor entered the front door, walked to the couch, and sat down beside the dog. The dog stayed lying on mark and looked in the direction desired. Everything went well.

In the scene where the dog attacks the man, prior to shooting the scene the trainer placed the dog on its mark next to the actor. The attack occurred off-camera. Non-toxic blood was applied to the dog’s mouth. On cue, the dog attacked the trainer’s sleeve. The dog was trained for this action.