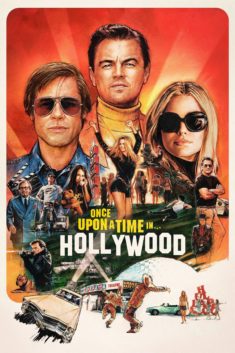 Once Upon A Time in Hollywood
Release Date: July 25, 2019
Certification:

In the scene where the actress in the airport picks up a dog and places him in a carrying case, the dog had a crate on set for resting and safe containment. The dog was leashed when she was not working. The set was a comfortable working temperature of approximately 68 degrees. A stuffed dog was used in the scene(s) with the dog carried in the carrier. On action, the actress picked up the dog, and placed him in a carrying case.

When the couple drove the car through the canyons with the dog on the girl’s lap, the dog had safety line on and the actress held that securely while holding the dog. Vehicle speeds did not go over 45 MPH. Freeway was locked to the public. Prior to shooting the scene the dog’s trainer instructed the actress how to hold the filament and the dog. Trainers also checked the dog between takes.

In the scene where the group of girls walk down the sidewalk proceeded by a dog, on cue six actors cross in front of a car in a single file line with the dog. The trainer was off-camera, cuing the dog. The street was closed to the public.

In the scene when the actor comes home to his trailer, greets his dog, with the dog licking his face, the dog was well-suited for the action. The trailer was built on a set, constructed on a stage. The stage was air-conditioned. The dog and the actor were well acquainted with each other. When the actor fed the dog, the food was organic and to the dog’s liking.

In the scene where the actor walks to his backyard and plays fetch with his dog, the action was rehearsed with the animal trainers prior to rehearsing with the actor. The actor threw a red ball (ranging in distance from 20 feet to 60 feet) two times per take. The dog ran or trotted, retrieved the ball, and returned to the bench where the actor was sitting. The dog then placed her front paws on the bench to the left of the actor, as the trainer was off-camera cuing the dog. The dog received food treats and verbal praise as positive reinforcement for performing the animal action. The dog appeared to enjoy chasing and retrieving the ball, which served as additional positive reinforcement.

In the scene where the actors drive into the studio and stop the car near the western set and we see horses in the background, all the horses were handled by professional wranglers. The wranglers were in costume riding horses and driving wagons.

In the scene where the actor rides his horse through Western town, stops, ties horse and gets in a gunfight with another actor, just before action SFX added smoke to actors’ guns as if they just fired them. The firing wasn’t close enough to the horses to effect them. The loud gunfire was added in post production.

In the scene where the actor drives into ranch and we see horses and dogs in the background, the horses and dogs were well-suited and rehearsed the action. The area was cleaned, freed of debris. Trainers spread food around the area to keep the dogs on their marks. Trainers were off-camera watching dogs the whole time.

In the scene where the actor helps the woman get on horse and they face other actors, both on horseback, all the actors were acquainted with their horses prior to filming. Horse trainers were off camera cuing the horses the whole time. Water and shade were provided between takes. When the actor gets on his horse and rides through the compound to reach the ranch, the dirt area was checked prior to shooting. Production shot the scene with a camera car at a healthy distance from rider and horse. The stuntman rehearsed the trajectory several times.

When we see the dead rat in the corner, the rat was fake, production sent us a receipt for the fake rat.

In the scene where the dog attacks intruders, seemingly tearing them to pieces, the scene was filmed in many sequences. This whole scene was shot on stage. The stage is basically a kitchen, a living room and a foyer. The dog’s trainers patterned and rehearsed the dog to her action, while the crew prepped the set. First they had her jump on the couch and look at the intruders. They accomplished this with hand gestures.

When the dog attacks, the trainers simply cued the dog to bark and jump off the couch. For the bite scenes, production created a fake, custom-made dog/puppet. A puppeteer operated the machine, which had piped tubing with fake blood in its mouth. The actors acted as if they were being bitten by the dog, when in fact the dog was a machine and being operated off-camera.

When we see the dog scratch at the door, the camera was outside the doorway to the bedroom hallway. The dog was released by the trainer, who ran to the closed door. The trainer was behind the closed door, calling to his dog. The dog responded by jumping up on the door. The dog scratched the door a few times, but it was very soft. The sounds of scratching was added in post.