An ambitious young carny with a talent for manipulating people with a few well-chosen words hooks up with a female psychiatrist who is even more dangerous than he is.
Full Certification 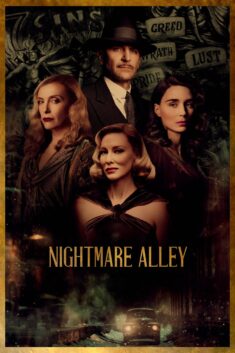 All horseback riders were stunt riders or experienced actors who were skilled at riding, mounting and dismounting. All running/galloping scenes were well choreographed, and actors used caution while on and near animals. When teams of horses pulled wagons or carriages, the drivers were experienced and teams of horses were familiar with each other and accustomed to the pulling action. Whenever horses were seen tied to posts/fences, they were attached to lead ropes tied to posts.

In the scene when the actor takes a chicken out of its cage and drops it in an arena, it’s important to note that SFX and VFX will be used in final scene. A robotic hen will be filmed in future elements of the scene. The location was an interior studio set made to look like the inside of a circus tent with a pit in the middle. Prior to filming the scene, the chicken wrangler took a chicken from its cage and placed it in the actor’s hands. They would film the scene and replace the chicken. When the actor released a hen in the pit, a wrangler stood below to catch the hen. Each hen was used only once in this sequence.

When we see “the geek” grab the hen in the pit and bite its head off, this scene was filmed in chunks. First they filmed a real hen walking in front of the actor. Then they cut camera, placed a “fake chicken” on the ground, then the actor grabbed the chicken and bit into its neck.

In the scene where we see the actor locked in the cage and see chickens grazing in the background, prior to filming the scene the wranglers collected hens from the livestock trailer and placed them into wooden prop crates. Those crates were transported to the set and placed in the background. Hens were provided with food and water.

In the scenes where the actor walks through the carnival grounds and we see a man leading a horse by a tether in the background, the horse wrangler was in costume and basically acted as a background performer. After filming the scene, the wranglers put the horses back in their pens.

In the scene where the actor walks into the room holding a rabbit and places it on a table, the wrangler showed the actor how to hold the rabbit prior to shooting the scene. Wrangler was always a few feet away from rabbit when he was on set. Wranglers set up portable pens to corral rabbit onto smaller areas of set.

In the scene where the actor carries the rabbit in the cage and places it on the ground, the wrangler showed the actor how to carry the case. The wrangler explained it was important to support rabbit with actor’s body as he lowered the rabbit and to keep rabbits body level on decent toward floor.