Monitored: Outstanding A trip to a mid-summer festival ends in violence. 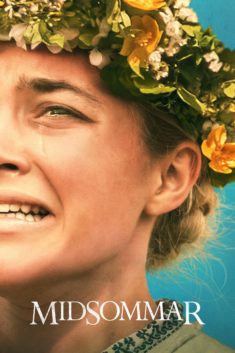 Throughout the film when we see farm animals in the background of the village, which includes goats, chickens, dogs, sheep and cows prior to shooting the animal company undertook a full and detailed risk assessment. The animal coordinator was present on set at all times. All routes were clear of hazards, dangerous debris, electrical wiring and equipment. Costumed handlers had full control of the animals on set and no member of the cast or crew were permitted to approach, touch or feed the animals without the express permission of the handlers. All special effects, smoke and fire were kept to a minimum in the vicinity of the animals. The animals were watered regularly. The animals were comfortable working with each other.

In the scene where the actors walk through the commune passing by a bear in a cage, the trainers drove the bear to the set. The trainers were responsible for the bear movement at all times. The bear was used to the cage. The bear was not forced to leave but was encouraged to leave using honey and apples. The sectional doors were then opened and the bear walked through into the set cage with the encouragement of apples. After filming, the bear was released for the day.

In the scene where a group of pigeons disperse from bushes, the pigeons were transported to the location in their transport trailer. The set was in a stone quarry at the base of a high cliff. There was an area behind this bank where the trainer could release the birds. The trainer and handlers carried 6 crates (total of 75 birds) to the area behind the bank of stone, out of shot of the camera. On action, the trainer and handlers lifted the tops off the crates so the birds flew straight up and birds flew up and sway from the cliff and the tree. The pigeons, being homing birds, circled in the sky above the quarry several times to get their bearings and headed for home. The birds made it back to their homing base.