Celebrate the joy of a perfectly executed shot to the groin as Johnny Knoxville, Steve-O and the rest of the gang return alongside some newcomers for one final round of hilarious, wildly absurd and often dangerous displays of stunts and comedy.
Full Certification 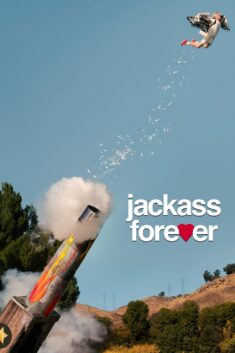 In the scene when players walk into room and the wrangler stands in front of them and he pulls some rattlesnakes out of a barrel. Prior to filming, the wrangler brought snakes to set in individual plastic containers. Trainer uses hook and long snake tongs to handle snakes. Trainer also brought large rubber snakes for the props department to use. Containers are well marked that they hold rattlesnakes. The wrangler then placed the snakes on the ground. In the stunt, the snake was not harmed.

The scene when the spider crawls between two helmets connected by a plastic tube,a professional trainer brought the spider to the set. The trainer stood nearby (on camera) while the spider was working. There was a safety meeting before they conducted the trick. When they used the tarantula to bite actor, the wrangler was trained to unhook spider from flesh.

In the scene where a vulture snaps at pieces of meat from his body, the bird was brought to set in a large crate. The transport vehicle was parked close to set. The path from the transport vehicle to set was free of hazards. The trainers had the sufficient equipment to safely work the bird. The trainer stood behind the camera the whole time.

In the scene where the bear enters the room, scaring the actor, experienced bear trainers supervised all activities. The trainers had three weeks of prep, including one week on set. The animal was well-suited to the work. The trainer wore a headset to communicate with the team of trainers. If they sensed danger, they would jump in and get him, which was never necessary.

In the scene, were the actor stands in the middle of an arena, and they open a chute in which a bull chases him. The bulls were brought to set in trucks and trailers and unloaded into the pens of the location. The location has bull pens and an arena with a bull chute. There were also water troughs in the pens. Prior to shooting the wranglers discussed exit plans. If the bull got past the panels the bull would still be in the arena and all the gates were secured. Minimal crew in arena and no crew walking around as a distraction.