Another R.L.Stine story comes to life in this comedy adventure!
Full Certification 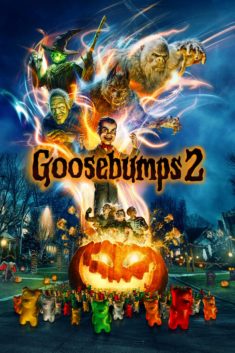 In the scene where we see the headless horseman gallop up to the actors on horseback, stop, then ride off, trainers brought the horse to set. Barium cleets were placed on the horse for the pavement. This scene was filmed in a private secluded neighborhood after midnight. The street was closed to the public. Prior to shooting the scene the wrangler got into a costume and mounted the horse at his mark. On action the wrangler lifted his rubber sword and cued the horse with legs and verbal commands as another trainer cued verbally off camera to rear back. The horse reared back a couple times for the scene. On cut, the horse was taken back to his trailer.

In a subsequent scene where the actress is driving and comes to a stop at an intersection, where she sees the same headless horseman ride past, the same wrangler mounted the horse in costume and reared the horse on its mark near the intersection. The car was never driving while the horse worked.