An army ranger and his dog embark on a road trip along the Pacific Coast Highway to attend a friend's funeral.
Full Certification 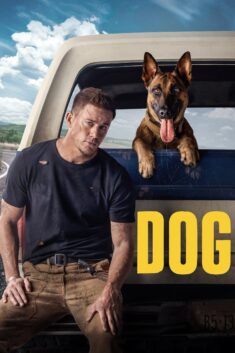 In the scene at the dog training facility where we see a dog bite a trainer’s arm, all the dogs were housed in crates in separated vehicles. The dogs were kept in cool AC when not working on set.

In the scene where the actor walks into the shelter and sees the dog with the muzzle on, the dog was trained to bark very excitedly at a toy. Prior to shooting the scene, the trainer showed the dog the toy, and the dog would bark on cue. They used the same trick when the dog was put in the back of the truck in a crate.

In the scene where the actor drives the truck and the dog barks in the crate in the backseat, the trainer hid in the floor area and she would occasionally say her name to keep her attention forward as the car drove. When the dog tries to get out of the crate, the bronco never drove, it was stationary on a sound stage and had several large screens playing video playback to simulate the bronco driving. The dog was trained to wear a muzzle. Dog had been prepped to speak and circle while wearing the muzzle.

In the scene where the actor approaches the car and sees the dog after it tore up his upholstery, the trainer was lying down in the back of the car. A trainer held up a piece of the seat that set dressing had pre ripped to give the dog something to grab ahold of. The dog loved to play and tear at the set dressing. The dog would rip and pull at the seat. As the actor came up and yelled the dog didn’t react at all, she continued to rip the seat and pull.

When the actor gives the dog food and water when parked in the parking lot and two girls approach with their dogs on leashes, the trainer stood off-camera. The extras on set never interacted with the dog on set. The food that the actor fed dog was food from the trainer. The dog was licking baby food with water to make her look like she was drinking water. The dog Brita never interacted with the Shiatzus. Later, when we see the dog in the back, frustrated, the trainer laid on the floor of the truck and cued the dog. The dog was rewarded to keep her energy up and make it a positive experience for her.
In the scene where the man breaks back window and the dog jumps out of the window and attacks man, pulling on his jacket, the actor threw a foam brick as if to break the window. There was no broken glass. On action, the trainer cued the dog and he jumped out of the window and laded on a pad on the ground. Then they cut and filmed the dog biting the bite sleeve. After a beat, the trainer ran over and pulled the dog off the stuntman. The window breaking was created in post with visual effects.

In the scene where the dog looks like he’s about to jump out of the back of the truck and the actor pulls the car over, the stunt was timed out carefully without the dog. Once the timing and speed of the cars had been carefully done the dog was brought in for rehearsal of jumping out of the car. The car was stopped when the dog jumped out. The other car that swerves around picture car was driven by a stunt man. That car was past the path dog would run by at least 25 feet by the time the dog jumped out of bronco. The trainer had production put down padding for the dog to land on. The dog was in top condition to jump out of the truck easily. The trainer was always in the moving car holding onto dog. Subsequently, when the actor chases the dog through the forest, the dog and trainer ran a trail path. The dog was in great condition to do the running shots. The paths the dog ran was always checked by the trainers before dog ran the path, it was nice soft dirt on the trail itself.

When actor wakes up and sees the pigs in shed, the trainers backed their trailer right up against the barn, so the pigs did not walk far. The pens were checked for nails and then had straw bedding placed inside. The pen was reinforced with wood panels to make sure pigs could not escape. Pigs were provided AC and water while in their pens on set.

In the scene where the dog runs through the hotel lobby, the people doing the stunts were all professional stunt people. The dog’s path was cleared for the dog to run to her trainer. The stunts were timed so the dog was already gone when running through stunt people as she was being chased. The muzzle was put on the dog last minute. The muzzle was removed after each take and she was rewarded with a tug toy. Trainers placed mats on the floor to help give the dog traction. The trainers were the only ones coming in to remove the dog when the dog did the actual muzzle hit.