In 1970s London amidst the punk rock revolution, a young grifter named Estella is determined to make a name for herself with her designs. She befriends a pair of young thieves who appreciate her appetite for mischief, and together they are able to build a life for themselves on the London streets. One day, Estella’s flair for fashion catches the eye of the Baroness von Hellman, a fashion legend who is devastatingly chic and terrifyingly haute. But their relationship sets in motion a course of events and revelations that will cause Estella to embrace her wicked side and become the raucous, fashionable and revenge-bent Cruella.
Full Certification 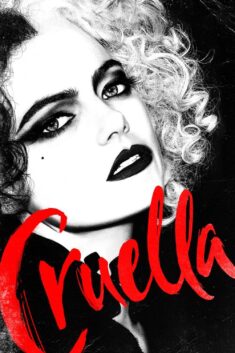 In the scene where the woman comes home and sees the puppy, before shooting the puppy was carried to set by the trainer. When the camera was ready, the trainer placed the puppy in the corner of the room on some blankets and gave him a “stay” command. On command, the trainer called the puppy to her and the pup ran across the room. When we see the two women in the car and the puppy is on the woman’s lap, the puppies were brought to the set by trainers wrapped in blankets since it was so cold. The puppy was placed in the actor’s lap in the car. When the car stops and the actress gets out with the puppy following, the trainer stood behind the camera and cued the dog to walk.

When the young Estrella runs from the mansion holding the puppy, the puppy wore a harness and the actress ran at a slow place. When we see the Baroness with the three dogs behind her, the trainer placed the dogs on their marks and cued them to look at him behind the camera. There was no cliff, that was created through CGI.

In the scene when Estrella wakes up next to the fountain with the puppy, and we see a dog swimming in the fountain, prior to action the dog was dressed in a wetsuit and held with a coat on and in the heated tent. One handler got into the fountain (ankle deep) at point A and another handler got in at point B. A specially made ramp was made for the dog to walk out of the water. When cameras were rolling the dog was passed to handler Gwen by handler Collette. On action the dog was lowered into the water and the handler called the dog to her. The dog swam for 1m and walked the rest of the way. The dog walked up the ramp and was immediately wrapped in a towel and taken to the heated tent.

In the scene when the girl runs into the alley, holding the puppy, the set was an alleyway with a box built onto a wall, creating a false wall at head height. A hatch was in the front of this space with an opening at the far end. The dogs were carried to the set by the trainers. An eyepatch was placed on one of the dogs. On action, the trainer placed the dog into the hatch and a second trainer stood at the opening at the far end of the ‘box’ to call the dog and give her a food reward. The child actors then stood up on some set boxes beneath the hatch and the trainer handed the dog to one of them.

In the scene where Estrella falls off the roof and lands on mattresses, the actress stood on the mattress as if she fell through the hole of the roof. For the first take the chihuahua in his bag, with head and front feet out of the bag.

In the scene when the dog runs down the aisle of the bus with a wallet in his mouth and jumps out of the bus, the trainer put the eye patch on the dog before shooting. The old fashion double decker bus was stationery with running engines. Prior to shooting, the trainer dropped the wallet in front of the dog, then asked the dog with verbal cues to pick up the wallet and walk to the stairs, then walk down the stairs, stop at the third stair and drop the wallet

In the scene when the man sits at the monitor and turns to press a button and sees a couple rats, trainers placed the rats on a crate under the electric circuit board and three more were placed on the floor under the consul. As soon as they finished filming, the rats were quickly collected and placed in the trainer’s car. The same action was taken in the scene where the man opens the platter revealing a couple rats.

In the scene in the ballroom when people are running around and the actor walks out of the party holding the dog dressed in a rat’s costume, production filled the ballroom with a lot of non-toxic water based smoke. The scene included 100 extras. The trainer dressed up dog in the room next to the set then brought the dog to the set and handed her to trainer in wardrobe. On action, the crowd started to run around, the actor said his line, then turned to trainer in wardrobe. After final cut the trainer took off the rat costume and eye patch and brought the dog back to her heated van.

When we see three Dalmations in bathtubs in groomer’s, the parlor is a real grooming parlor. Dogs had towels on the ground next to the baths, these were used to dry the dogs off and remove soap suds. Dogs had been trained in metal bath tubs