Monitored: Outstanding In the middle of a hurricane, a young girl attempts to save her father who’s trapped in his house, and in doing so, must go head to head with bloodthirsty alligators. 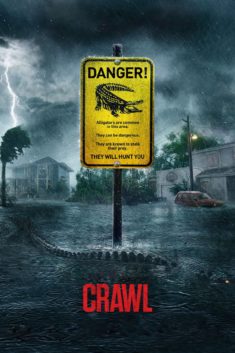 In the scene where the actor walks into an abandoned house and first encounters her father’s dog, the dog had two trainers and was brought to set on a collar and lead. The lead was taken off during filming and all the doors to the outside were closed. The dog was prepped by his trainer to run to the actress on cue. The actress and the dog spent time together rehearsing prior to filming.

When the girl drives through the storm with the dog sitting in the passenger’s seat, the entire stage is a water tank and consists of a town with wooden houses, gardens, a petrol station and a playground. This scene was set inside a stationery car against a blue screen on the set. The trainer leaned down in the backseat to cue the dog to stay seated. Outside of the car there was wind, rain and debris (leaves) hitting the windows The dog action, SFX and VFX were discussed in full before filming the scene. The dogs exposure to the SFX outside of the car was limited. All loose materials on set were removed prior to the wind machines being used. Strict safety controls were in place for crew and animals entering the water tank. A minimum of two divers were on set at all times. The dogs had all been fully trained to swim and training videos were made available to me prior to filming. The water was filtered throughout the day and was maintained at a temperature of 29 degrees. There were predetermined dry safe areas allocated for the dogs use in the flooded area prior to each part.

In the scene where the actress walks into the house, looking for her father, the tree crashes through the window and the dog runs throughout the house, the scene was filmed in different parts. The set was built inside a large water tank and consisted of a house. The entire house was inside the water tank and as the days progressed the water levels will rose. Before shooting commenced the trainers rehearsed with the dog in the corridor and going through the dog flap, rewarding her with sausage each time he came through.

Whenever we see the dog recoil from the sound of thunder and lightning, the trainer simply cued the dog to act scared and hide under the table.

In the scene where the actress looks down in the basement and the dog follows suite, barking, off-camera the trainers did some “speak” training with the dog using hand signals to encourage her to bark. When the girl walks downstairs to basement and a rat runs past her, the handlers used wooden light boxes with buzzers to train and film with the rats. When the rats were released by the handler, the light and buzzer in the box was triggered by the trainers and the rat ran towards the green light and into the boxes.

In the scene where the actor carries the dog across the river, there were dog wranglers and safety divers in wetsuits for safety. The dog loves to swim and has prepped playing in the water. The water is safe for people and animals and is tested 3 times per day. It was warm water and there were dry areas on set inside the houses where the dog was dried off with towels in-between takes. The dog was handed to the actor before action and given back to the trainers after cut on each. The dog base was just outside the studio where production have provided an air conditioned tent where the dogs were all inside separate carriers. Just before each take there were four large fans and water machines creating a storm like conditions of heavy rain and winds.